The use of rotary welding positioners in a manufacturing facility has the potential to revolutionize a company’s output, productivity and financial situation. These welding positioners drastically reduce the effort that workers need to put in to gain access to parts of an assembly or weldment that need welding. Rotary Welding Positioners make welding far easier and faster for employees, increasing company productivity and profits with the same workers they already have.

What are Rotary Welding Positioners?

Rotary welding positioners are a type of welding positioner that rotates an assembly so that an area that must be welded is easily accessible to a welder. They are intended to allow a worker to stand in one position and be able to constantly work on a level surface, adding comfort to the worker while reducing fatigue and increasing productivity. Rotary welding positioners grip an assembly, for example, a pipe joint, then can move to allow a welder to continuously weld a joint with no break in the weld. They are intended to improve welding quality and make welding safer and faster. 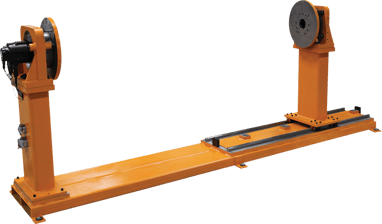 One of the largest motivating forces for companies to use rotary welding positioners is the increased production they bring. They allow employees to work smarter, not harder, and allow for better ergonomics that make welding easier for experienced workers and easier to learn for inexperienced workers. When the location on an assembly that needs to be welded can be positioned in a convenient, easily reachable place, workers will be able to weld faster and will be less exhausted by each welding job. This allows workers to be far more efficient while exerting less effort, allowing them to get more done in one day and making older, highly-skilled workers less likely to leave the workforce. If the welding location is brought to the worker rather than making the worker reach the welding location, the job becomes far less physically taxing.

The positioning time itself is dramatically reduced and made far easier by rotary welding positioners. Using older positioning methods, getting an assembly in the right position could sometimes take hours and involve using several workers at a time. This is quite costly to the company, as groups of workers are not able to produce anything on their own as they take hours of their time working simply to allow a certain welding area to be reached. Rotary welding positioners allow the same job to be completed in mere minutes, often by one worker. This saves hours of work, increasing productivity and production, and freeing up other workers to perform other productive tasks.

Production can also be increased when rotary welding positioners are coupled with automated welding machines, especially on simple assemblies. Robotically integrated welders increase productivity by working faster and requiring less downtime, and they are quite consistent. While a human can weld between 12 and 14 inches per minute (IPM), a robot can often weld at least 20 IPM. Obviously unlike employees, automated machines also do not require breaks or time off from work, and with proper maintenance will require minimal downtime. Robots are inherently consistent, as they can be programmed to weld a certain way for a certain product. Automation in this application has the potential to further increase production at a consistently high quality.

Rotary welding positioners can go a long way towards improving the safety of workers on the manufacturing floor, especially when large objects are being positioned for welding. Assembly and part positioning practices of the past could be quite dangerous, and involved using equipment such as forklifts, cranes and chains. This machinery was not specialized for the task of rotating weldment assemblies, sometimes leading to this machinery getting damaged or leading to a weldment being dropped. If the machinery was damaged, it would potentially lead to downtime not only for the welding project, but for other areas of the facility that required this equipment to operate. On the other hand, rotary welding positioners are specialized tools that are specifically designed to reposition weldments, and will not fail at their job when used properly.

Another advantage of using rotary welding positioners is that no scaffolding, ladders or lifts need to be used to reach high welding points on large assemblies out of reach of the floor. Without workers needing to climb to elevated areas, there is a lower risk of accident and worker fatigue is decreased, leading to healthier workers in the long run. Furthermore, many companies report an average drop in OSHA-reportable accidents when rotary weld positioners are used, as employees are placed in fewer dangerous positions to reach welding points. When using the older positioning methods, another danger is the fact that many experienced employees know the best methods with which to position assemblies, and when they retire or leave the company, this knowledge is not always passed down, leading to inexperienced employees performing dangerous tasks. Rotary welding positioners make it incredibly easy and safe to position welding assemblies, even for new, inexperienced workers.

Quality of welds are increased when a rotary welding positioner is used, as a welding location can always be moved to the ideal position that allows for the best, easiest work. Better ergonomics lead to better quality and repeatability, with workers able to adjust the angle and height at which their welding location is positioned. Workers will no longer need to reach up to weld or have reduced visibility as they are working. Better visibility of the weld also allows a worker to see if any welds are missed far more easily.

Rotary welding positioners are a no-brainer for any facility that welds large amounts of products, especially of large sizes. The improved safety, reduced process time, improved quality and decreased worker fatigue are all good for a company, and will help a business produce more while using the same resources.